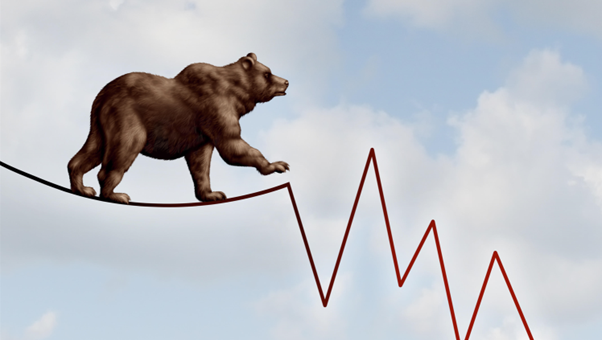 We generally encourage our clients not to follow the ebb and flow of the global stock markets. But every now and then, you can’t easily avoid it, and we’re at one of those moments now. Share prices, and specifically price falls, are once again front-page news. So, what’s going on? And what, if anything, can investors do about it?

As in 2008/09 and the first quarter of 2020, the ups and downs – mostly the downs in this case – of financial markets are newsworthy again. Global share markets are more than 20% below their recent peaks, which as the media constantly reminds us, meets the textbook definition of a “bear market”.

The image of a grizzly bear rampaging through markets and terrorising everyday investors is a potent one for the media, particularly given the demonstrated power of fear in generating and monetising the attention of mass audiences.

So, let’s take a look at some of the questions that people are asking.

How worried should we be about the future?

This is obviously a worrying time. There is no downplaying the emotional impact of seeing one’s portfolio balance significantly lower than it was a few months ago. You naturally feel poorer and more anxious because you feel you have no control over the outcomes. So, the initial response is to acknowledge how you feel.

What is causing all the volatility?

The answer is pretty evident. Everything is suddenly getting more expensive and central banks are jamming on the monetary brakes after years of having the pedal to the metal.

The upsurge in inflation is due to a combination of factors. Global supply chains were disrupted by the pandemic at the same time as central banks and governments were pumping up demand through monetary and fiscal stimulus. Disruption to supply alongside the supercharging of demand was a sure-fire recipe for inflation.

But on top of inflationary consequences of the pandemic and the policy response was Russia’s invasion of Ukraine, which like the oil shock of the early 1970s, has put a rocket under commodities markets —particularly oil, gas, and food.

Central banks, who only a few months ago were downplaying the inflationary shock as “transitory”, are now expressing concerns that inflationary expectations could become baked into the system. This new reality is prompting central banks to reverse course on interest rates and bond buying programs at speed.

All this is happening as the world starts the difficult and decades-long process of seeking to transition away from fossil fuels in a bid to rein in the worsening effects of human-made climate change.

The result of this confluence of factors is a major adjustment in both stock and bond markets. Bond yields, which just a couple of years ago, were at record lows, have been ratcheting higher. Concerned that central banks will overdo the reversal of stimulus and push the major economies into a recession, share markets have been recalibrating lower.

What does this mean for our investments? And is there anything we can do?

The historical evidence shows that the sort of upheaval we have been seeing can be a precursor of future volatility.

The danger for individual investors, is the temptation to time the market, getting out in the hope of missing the storm and then getting back in when the coast is clear. Evidence and experience suggests this behaviour risks making a bad situation worse. Inevitably all you achieve by selling into a down market is turning a paper loss into a real one and putting at risk the opportunity to enjoy the bounce when it comes.

Nobody knows when the bounce will come. It may be today, next week or next month. The worst-case scenario is that we’ve entered a protracted bear market that will last for a year or two, or perhaps even longer. But whenever the bounce comes, it’s likely to be sudden and unexpected, and it certainly won’t announce itself.

The most recent example of the virtue of discipline was in early 2020 when major benchmarks fell by between 30 and 40% in the space of a few weeks, only to bounce back and reach record highs within a few months. I think it is fair to say the veracity of the bounce-back took virtually everybody by surprise. Many who switched to cash at the onset of the pandemic were caught out and found themselves scrambling to buy back into a market that was higher than when they sold out.

Ten points to keep in mind

Bearing up to a bear market isn’t easy, it’s true. But the challenge is ultimately doable with a structured plan, a long-term focus and, crucially, an understanding that this will pass.

Please take a look at the video below “Learning to Live with Turbulent Markets” for more pointers from industry experts.

Aside from cash, good quality investment grade bonds are generally the most stable and defensive component of an investor’s portfolio. Yet over the last 12 months have bonds have fallen in value by around 10%.