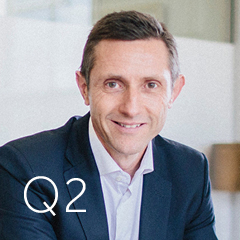 Both global bonds and equities fell heavily in an eventful June quarter in which headlines were dominated by the ongoing war in Ukraine, rising inflation and efforts by authorities to unwind pandemic-era monetary stimulus.

Interest rates rose across the curve in anticipation of central banks acting to restrain an inflation breakout that a year ago they characterised as likely to be transitory. Recession fears hit stocks globally, with some major indices entering bear market territory in June, although value offered a rare bright spot.

Aside from a major humanitarian crisis, the Ukraine conflict was judged by the International Monetary Fund in its world economic outlook as likely to contribute to a significant slowdown in global growth this year.

The war also contributed to rapid increases in the prices of fuel and food, compounding the inflationary impact of pandemic-related supply chain disruptions. China’s major cities spent much of the quarter in government imposed lockdowns.

Global bond markets posted a second consecutive negative quarter, with yields rising sharply across maturities in response to higher-than-expected inflation and in anticipation of benchmark rate increases by central banks.

The US Federal Reserve boosted its target rate by 50 basis points (bps) in May and followed that up in June with a larger-than-expected move of 75 bps. Likewise, the Reserve Bank of Australia wrongfooted markets with a 50 bps hike in June, following on from a smaller move in May.

For its part, the RBA forecast inflation to peak later in 2022 as global supply-side problems continued to ease and commodity prices stabilised. Nevertheless, it and other central banks indicated a further withdrawal of stimulus in the months ahead.

Amid the uncertainty over interest rates, inflation, the war in Ukraine, COVID lockdowns and what stimulus withdrawal would do to global economic growth, it proved to be a tough environment for equity markets.

In terms of the premiums, value outpaced growth across the board in the latest quarter, with energy and healthcare stocks among the better performing sectors. On the downside, IT, materials and consumer discretionary stocks lagged. On the size front, large caps outperformed small in developed and emerging markets. REITs also posted a second consecutive quarter of losses.

The US dollar rose across the board in the quarter, with the AUD retreating below US70c. This cushioned the fall in offshore equity markets for unhedged investors in Australia.

What Dominated the News

The following news summary is not intended to explain the markets’ performance in the quarter, but to provide some perspective about what dominated headlines:

Within Defensive Assets, International Fixed Interest (-4.7%) posted a negative return. Bond Yields rose (prices fell) on expectations of higher future inflation following the significant fiscal and monetary policy initiatives deployed since the onset of the pandemic. Australian Credit (hybrid securities) also delivered a negative return (-0.9%) following a widening of credit spreads. Performance for the quarter across diversified portfolios ranged from -7.2% for 50/50 Growth/Defensive portfolios to -10.1% for 85/15 portfolios.

The US yield curve is now experiencing an inversion between the closely watched 10y – 2y spread. Yield curve inversion – which suggests rate rises in the short term before a slowdown or fall in economic growth leads rates to fall – has been seen as an indicator of a coming recession in past cycles and will therefore attract media attention.

The year ended 30 June 2022 presented many opportunities for systematic portfolio rebalancing between asset classes (i.e. topping up hardest hit asset classes, and selling down those most resilient). During this period, returns from Growth Assets were positive for the first six month, being above 10% for International Shares and Property & Infrastructure and 3% for Australian Shares before turning sharply negative in the new year. As a result, profit taking in the first half was switched for topping up underperformers in the second half.

International Fixed Interest (-9.3%) experienced the worst annual return since the inception of the Global Aggregate Bond Index in the 1990s as bond yields rose. It is notable that higher bond yields are the driver of higher long term returns from the asset class and provide a great buffer against future declines in Growth Assets should they occur. In a rare year where all the major asset classes posted low or negative returns, annual returns for diversified portfolios ranged from -5.3% for a 50/50 portfolio to -6.6% for a 75/25 portfolio, the weakest financial year returns since the Global Financial Crisis (2008/09).

Value Companies (those with cheaper relative valuations), and

Each of these three sub-categories behave differently through time, and each plays a role. Through the investment cycle we expect each to experience different sequencing of return, leading to opportunities to top up the underperforming components and take profits from the components that are performing well.

Value companies continued their relative outperformance during the quarter and have now recovered their medium term (3 to 5 year) and long term (10 year) performance advantage over the broader market. After a period of excess returns to the end of 2021, Small Companies lagged over the period, significantly underperforming the S&P/ASX 200 Index.

Our ‘Industry Equal Weight’ approach to the selection of direct Australian shares continued to provide diversified sources of returns and experienced a similar rotation of sectors driving returns. The performance of the Industry Sectors varied through the year as shown in the table below (the top and bottom two sectors each quarter have been highlighted). In many respects the ‘winners’ and ‘losers’ have switched places, with Materials, Energy, and Utilities leading the way, and the Consumer Discretionary and Information Technology Industry Sectors lagging after posting much higher than market returns over the preceding 12 months.

Our approach seeks to manage risk and improve diversification by allocating equally across the Industry Sectors, rather than adopting the traditional market weighted approach. This method takes advantage of the less than perfect correlation between the Industry Sectors, which can be clearly seen in the table. Through the business cycle there are periods when each sector delivers superior returns and periods when they underperform. This variation in return provides opportunities to harvest returns from outperforming sectors and add to exposures in underperforming sectors at depressed prices – without trying to forecast in advance when the rotation will occur.

Global equity markets in the March quarter posted their worst quarterly performance since the onset of pandemic two years ago, while the global bond market notched up its worst performance in at least three decades.